Read Between The Lies 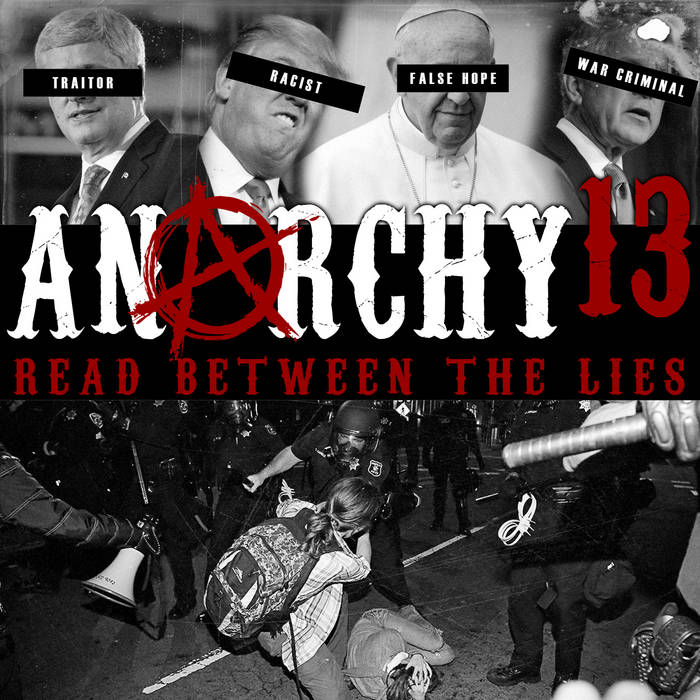 READ BETWEEN THE LIES is the first full length studio album by ANARCHY13. Recorded in Tangerang, Indonesia at J.A.M.S. (Just Another Motherfucking Studio), RBTL is a completely D.I.Y. album in respect that it was designed, written, recorded, produced, mixed, and mastered by the members of Anarchy13.

Tragically, three days after the album was finally finished being recorded, drummer Total Poseur was killed in a motorcycle accident and didn't get to hear the finished product. This album is a tribute to all the hard work of the band members, former and current and is being released in dedication to Total Poseur (Edo Pedrico). He will never be forgotten.
------------------
In memory of
Edo Pedrico
(December 17, 1981 - May 10, 2016)

On May 10th, while on his way to band practice, Edo Pedrico (A.K.A. Total Poseur) was killed in a motorcycle accident. He left behind a legacy of pure brotherhood, commitment, honour, and a massive following of friends who felt an intense sorrow with his sudden passing. Edo was a dedicated and talented musician, a trustworthy friend, and a loving son and brother who would always put others ahead of himself. Aside from being the drummer in ANARCHY13, he also performed with prog-metal band GHAUST, as well as filling in on guitar for Kelawar Malam on occasion. His love of music, especially ska and punk, allowed him to blend styles and ideas into a sound he could call his own. We could never have asked for a better drummer, but most of all, we could never have asked for a better friend. You will be missed Edo, but in the music on this album, you will live forever.
------------------
ANARCHY13 would like to thank the Pedrico family, Pamulang crew, All the Indonesian punks who have supported us, Rumah Pirata, Pyrate Punx, ALE, Message From Jessica, Loading, Buddy Bully, TAKE, fatrace, rhetoric states, dirty ass, Superman is Dead, devildice, seringai, The Spikeweed, Dirtwaves, Nutmeg, Posh Decay (USA), High Heels Lo Fi (canada), POTBELLY, (USA) P.I.G. Records (USA), Strength Approach, Rejected kids, cat And Dog, Beatrix, Ghaust, Kelelawar Malam, Adrian Adioetomo, Enam Sembilan, Detected Overall, Psychoville (Singapore), Flying Fortress (Singapore), Billy The Klits, Jollyty Joy, Bawling Warden, Bandit 88, Ex Bastard, The Gorgets Punk Lady, Sex Without Souls (canada), and so many more. Love and respect to all.

© & ℗ 2016 Uzeless Rekordz
Unauthorised duplication is a violation of applicable laws.
But, honestly, if you you share this with your friends, that’s cool with us.

ANARCHY13 is a 3-piece punk band originally formed in 2010 as a side project by frontman J.D. Anarchy, vocalist of Citizen Useless.

Anarchy13’s lyrics are largely political & endure to spread knowledge & inspiration for people to fight for freedom from fascism, oppression, racism, and inequality. The band & its members are strong believers in the D.I.Y. ethos. ... more

Bandcamp Daily  your guide to the world of Bandcamp

Serena Cherry debuts her black metal project, plus a Pick from the Crypt block from Svalbard